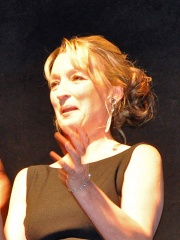 Lesley Ann Manville (born 12 March 1956) is an English actress. She is known for her frequent collaborations with director Mike Leigh, with her winning the London Film Critics Circle Award for British Actress of the Year for the films All or Nothing (2002) and Another Year (2010), and the National Board of Review Award for Best Actress for the latter. Her other collaborations with Leigh include Grown-Ups (1980), High Hopes (1988), Secrets & Lies (1996), Topsy-Turvy (1999), Vera Drake (2004) and Mr. Read more on Wikipedia

Since 2007, the English Wikipedia page of Lesley Manville has received more than 2,630,356 page views. Her biography is available in 29 different languages on Wikipedia making her the 4,432nd most popular actor.