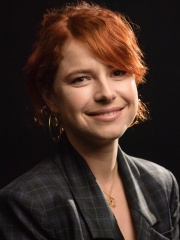 Jessie Buckley (born 28 December 1989) is an Irish actress and singer. A Royal Academy of Dramatic Art graduate, she began her career in 2008 as a contestant on the BBC TV talent show I'd Do Anything, in which she came second. The recipient of a Laurence Olivier Award, in addition to nominations for an Academy Award and three BAFTA Awards, she was listed at number 38 on The Irish Times' list of Ireland's greatest film actors of all time, in 2020.Her early onscreen appearances include portrayals in BBC television series, such as Marya Bolkonskaya in the 2016 adaptation of Leo Tolstoy's War and Peace, Lorna Bow in Taboo (2017) and Marian Halcombe in The Woman in White (2018). Read more on Wikipedia