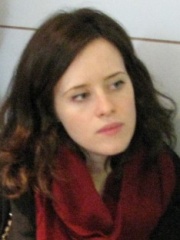 Claire Elizabeth Foy (born 16 April 1984) is an English actress. She studied acting at the Liverpool John Moores University and the Oxford School of Drama, and made her screen debut in the pilot of the supernatural comedy series Being Human, in 2008. Following her professional stage debut at the Royal National Theatre, she played the title role in the BBC One miniseries Little Dorrit (2008) and made her film debut in the American historical fantasy drama Season of the Witch (2011). Read more on Wikipedia

Since 2007, the English Wikipedia page of Claire Foy has received more than 8,956,859 page views. Her biography is available in 35 different languages on Wikipedia making her the 4,035th most popular actor.