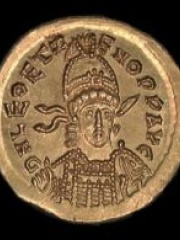 Leo II (Greek: Λέων Β', Leōn II; c. 467 – November 474) was briefly Roman emperor in 474 AD when he was a child aged six or seven. He was the son of Zeno, the Isaurian general and future emperor, and Ariadne, a daughter of the emperor Leo I (r. Read more on Wikipedia

Since 2007, the English Wikipedia page of Leo II has received more than 5,496 page views. His biography is available in 46 different languages on Wikipedia making him the 1,559th most popular politician.

Among politicians, Leo II ranks 1,550 out of 14,801. Before him are Magnus VI of Norway, Amaro Pargo, Louis Mountbatten, 1st Earl Mountbatten of Burma, Jehu, Alexander Lukashenko, and Genrikh Yagoda. After him are Jehoash of Judah, Herman Van Rompuy, Ricimer, Mentuhotep II, Gyges of Lydia, and Imad ad-Din Zengi.