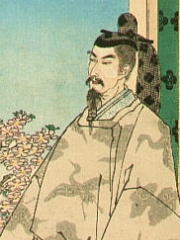 Emperor Nintoku (仁徳天皇, Nintoku-tennō), also known as Ohosazaki no Sumeramikoto (大鷦鷯天皇) was the 16th Emperor of Japan, according to the traditional order of succession. Due to his reputation for goodness derived from depictions in the Kojiki and Nihon Shoki, he is sometimes referred to as the Saint Emperor, (聖帝, Hijiri-no-mikado). While his existence is generally accepted as fact, no firm dates can be assigned to this Emperor's life or reign. Read more on Wikipedia

Emperor Nintoku is most famous for building the first large-scale irrigation system in Japan.

Among politicians, Emperor Nintoku ranks 2,925 out of 15,710. Before him are Zalman Shazar, Arsinoe III of Egypt, Rajendra Prasad, Beatrice of Portugal, Dmitry Ustinov, and Sophie of Mecklenburg-Güstrow. After him are Cassius Chaerea, Stephen Tomašević of Bosnia, Hiero I of Syracuse, Absalon, Daji, and Canute Lavard.