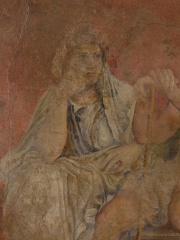 Lanassa was a daughter of king Agathocles of Syracuse, Sicily, perhaps by his second wife Alcia. In 295 BC Agathocles married Lanassa to King Pyrrhus of Epirus. Agathocles himself escorted his daughter with his fleet to Epirus to her groom. Read more on Wikipedia

Since 2007, the English Wikipedia page of Lanassa has received more than 2,421 page views. Her biography is available in 15 different languages on Wikipedia making her the 549th most popular companion.

Page views of Lanassas by language

Among companions, Lanassa ranks 555 out of 586. Before her are Matilda of Holstein, Gilbert, Duke of Lorraine, Goiswintha, Blanca of Navarre, Queen of Castile, Iset Ta-Hemdjert, and Mariniana. After her are Rambai Barni, Keratsa of Bulgaria, Joan, Countess of Ponthieu, Anabella Drummond, Nicole Brown Simpson, and Zenobia of Armenia.

Among people born in 400 BC, Lanassa ranks 71. Before her are Philitas of Cos, Taxiles, Alcetas, Artabazos II, Aristides of Thebes, and Laomedon of Mytilene. After her are Nicaea of Macedon, Amastrine, Ariobarzanes II of Cius, Lucius Aemilius Barbula, Eudamidas I, and Agathocles. Among people deceased in 300 BC, Lanassa ranks 33. Before her are Hermippus of Smyrna, Cephisodotus the Younger, Manius Valerius Maximus Corvinus Messalla, Aristyllus, Gaius Sulpicius Paterculus, and Manius Otacilius Crassus. After her are Lucius Manlius Vulso Longus, Anyte of Tegea, Eudamidas I, Lucius Valerius Flaccus, Laodice II, and Lucius Caecilius Metellus Denter.