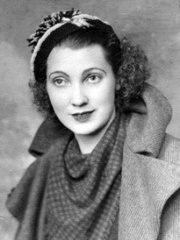 Mary Anne Trump (née MacLeod, Scottish Gaelic: Màiri Anna NicLeòid; May 10, 1912 – August 7, 2000) was an American philanthropist, better known for being the mother of Donald Trump and the wife of real estate developer Fred Trump. Born in the Outer Hebrides of Scotland, she emigrated to the United States in 1930 and became a naturalized citizen in 1942. Read more on Wikipedia

Since 2007, the English Wikipedia page of Mary Anne MacLeod Trump has received more than 3,640,572 page views. Her biography is available in 17 different languages on Wikipedia making her the 539th most popular companion.

Among companions, Mary Anne MacLeod Trump ranks 545 out of 586. Before her are Mary of Guelders, Margaret Drummond, Queen of Scotland, Duchess Elisabeth Alexandrine of Mecklenburg-Schwerin, Théodrate of Troyes, Tranquillina, and Eleanor of England, Countess of Bar. After her are Meresankh I, Liutgard of Saxony, Ri Sol-ju, Matilda of Holstein, Gilbert, Duke of Lorraine, and Goiswintha.