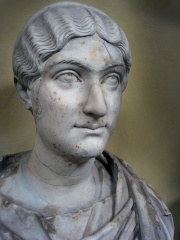 Since 2007, the English Wikipedia page of Tranquillina has received more than 38,829 page views. Her biography is available in 19 different languages on Wikipedia (up from 18 in 2019). Tranquillina is the 571st most popular companion (down from 542nd in 2019).

Page views of Tranquillinas by language

Among companions, Tranquillina ranks 571 out of 687. Before her are Plautia Urgulanilla, Margaret of Prades, Princess Januária of Brazil, Helena Angelina Doukaina, Yolanda of Courtenay, and Bertha of Swabia. After her are Audofleda, Bernadette Chirac, Alice of Antioch, Théodrate of Troyes, Joan of England, Queen of Scotland, and Morphia of Melitene.