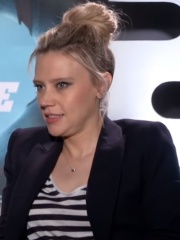 Kathryn McKinnon Berthold (born January 6, 1984) is an American actress, comedian and writer. She is known for her character work and celebrity impressions on the sketch comedy series The Big Gay Sketch Show (2007–2010) and Saturday Night Live (2012–present). Read more on Wikipedia

Since 2007, the English Wikipedia page of Kate McKinnon has received more than 13,282,383 page views. Her biography is available in 25 different languages on Wikipedia making her the 7,021st most popular actor.