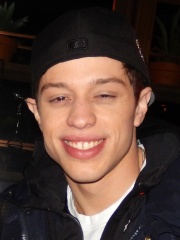 Peter Michael Davidson (born November 16, 1993) is an American comedian, actor, and writer. Born and raised in Staten Island, New York, Davidson began his career in the early 2010s with minor guest roles on Brooklyn Nine-Nine, Friends of the People, and Guy Code. His father, Scott Matthew Davidson, was a New York firefighter who died in 2001 at the World Trade Center during the September 11 attacks. Read more on Wikipedia

Bleeding Cool News
The Rookie S04 Finale Preview: Firefly Reunion, Pete Davidson & More
During a week that saw a number of shows shuffling off their network or streamer's programming mortal coil, ABC's Nathan Fillion-starring The Rookie has been having a pretty good week. First came the news that the backdoor pilot for the Niecy Nash-Betts-led s…
Ray Flook
Independent
Kim Kardashian says Pete Davidson is the ‘sweetest human being on the planet’
The reality star and the comedian have been dating since last October
Laura Hampson
Us Weekly
Hold Up! Is Pete Davidson Being Managed by Kris Jenner?
A new A-List client? Pete Davidson is not being managed by Kris Jenner, Us Weekly can exclusively confirm. Rumors that the Saturday Night Live star, 28, signed with the Keeping Up With the Kardashians alum, 66, first surfaced on Thursday, May 12, when “Morgan…
Julia Emmanuele
Page Six
Kim Kardashian calls Pete Davidson the ‘sweetest, nicest human being’
Kardashian was gushing over the "SNL" star to family and friends just days after they were spotted holding hands at Knott’s Scary Farm last year.
Lindsey Kupfer