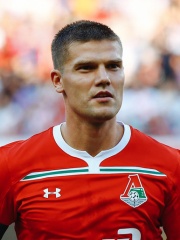 Igor Vladimirovich Denisov (Russian: Игорь Владимирович Денисов; born 17 May 1984) is a Russian former professional association footballer who played as a midfielder.Denisov progressed through the youth ranks at Zenit and after making his debut for the senior team in 2002 has since played his entire club career for the St. Petersburg outfit up until his transfer to Anzhi in 2013. He made his debut for Russia in 2008, going on to feature at Euro 2012 and the 2014 World Cup. Read more on Wikipedia

Since 2007, the English Wikipedia page of Igor Denisov has received more than 169,304 page views. His biography is available in 44 different languages on Wikipedia making him the 4,989th most popular soccer player.