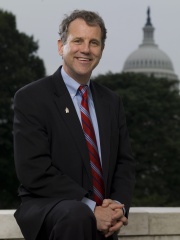 Sherrod Campbell Brown (, born November 9, 1952) is an American politician serving as the senior United States Senator from Ohio, a seat to which he was first elected in 2006. A member of the Democratic Party, he was the U.S. Representative for Ohio's 13th congressional district from 1993 to 2007 and the 47th Secretary of State of Ohio from 1983 to 1991. He started his political career in 1975 as an Ohio State Representative. Brown defeated two-term Republican incumbent Mike DeWine in the 2006 U.S. Senate election and was reelected in 2012, defeating state Treasurer Josh Mandel, and in 2018, defeating U.S. Read more on Wikipedia

Since 2007, the English Wikipedia page of Sherrod Brown has received more than 1,878,327 page views. His biography is available in 24 different languages on Wikipedia making him the 13,793rd most popular politician.