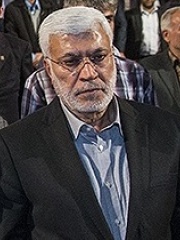 Jamal Ja'far Muhammad Ali Al Ibrahim (Arabic: جمال جعفر محمد علي آل إبراهيم‎ Jamāl Jaʿfar Muḥammad ʿAlīy ʾĀl ʾIbrāhīm, 1 July 1954 – 3 January 2020), known by the kunya Abu Mahdi al-Muhandis (Arabic: أبو مهدي المهندس‎, lit. 'Abu Mahdi, the Engineer'), also spelled Mohandes, was an Iraqi commander of the Popular Mobilisation Committee (PMC). At the time of his death, he was deputy chief of the PMC (Al-Hashd Al-Sha'abi). Since 1977 he was an opponent of Saddam Hussein and rose quickly in the ranks due to his popular support amongst the people after the regime fell because of his role in the defeat of ISIS. He became the commander of many popular volunteer militias that grew from the need to combat ISIS, including the Kata'ib Hezbollah militia group, which is an Iranian government designated terror organisation; and prior to that worked with the Iranian Islamic Revolutionary Guard Corps against Hussein's regime.Allegations of terrorism have been levelled against him over his activities in Kuwait in the 1980s. Read more on Wikipedia

Among politicians, Abu Mahdi al-Muhandis ranks 6,535 out of 15,710. Before him are Otto III, Margrave of Brandenburg, Aslan Abashidze, Jean-Pierre Jabouille, Augustinas Voldemaras, Zoltán of Hungary, and Maria of Courtenay. After him are Salitis, Herbert Pitman, Otto Braun, Servius Sulpicius Galba, Heinz Jost, and Laurent Fabius.