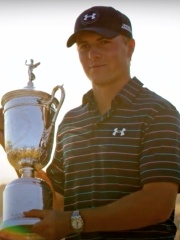 Jordan Alexander Spieth (born July 27, 1993) is an American professional golfer on the PGA Tour and former world number one in the Official World Golf Ranking. He is a three-time major winner and the 2015 FedEx Cup champion. In April 2016, Time magazine named Spieth to its list of the "100 Most Influential People", noting that he "exemplifies everything that's great about sports." Spieth's first major win came in the 2015 Masters Tournament, when he shot a 270 (−18) and pocketed $1.8 million. Read more on Wikipedia

Since 2007, the English Wikipedia page of Jordan Spieth has received more than 6,594,225 page views. His biography is available in 27 different languages on Wikipedia making him the 22nd most popular golfer.