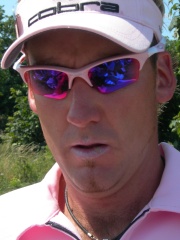 Ian James Poulter (born 10 January 1976) is an English professional golfer who is a member of the world's top two professional golf tours, the U.S.-based PGA Tour and the European Tour. He has previously been ranked as high as number 5 in the world rankings. The highlights of Poulter's career to date have been his two World Golf Championship wins at the 2010 WGC-Accenture Match Play Championship and the 2012 WGC-HSBC Champions. Read more on Wikipedia

Since 2007, the English Wikipedia page of Ian Poulter has received more than 949,681 page views. His biography is available in 15 different languages on Wikipedia making him the 14,649th most popular golfer.

Among GOLFERS In United Kingdom