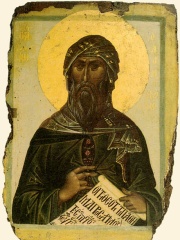 John of Damascus (Greek: Ἰωάννης ὁ Δαμασκηνός, romanized: Ioánnēs ho Damaskēnós, IPA: [ioˈanis o ðamasciˈnos]; Latin: Ioannes Damascenus; Arabic: يوحنا الدمشقي‎, romanized: Yūḥannā ad-Dimashqī), also known as John Damascene and as Chrysorrhoas (Χρυσορρόας, literally "streaming with gold"—i.e., "the golden speaker"), was a Christian monk, priest, and apologist. Born and raised in Damascus c. 675 or 676, he died at his monastery, Mar Saba, near Jerusalem on 4 December 749.A polymath whose fields of interest and contribution included law, theology, philosophy, and music, he is said by some sources to have served as a Chief Administrator to the Muslim caliph of Damascus before his ordination. Read more on Wikipedia

John of Damascus was a Christian monk who lived in the 8th century. He is most famous for his work, "On the Orthodox Faith."

Page views of John of Damascuses by language

Among philosophers, John of Damascus ranks 91 out of 1,089. Before him are Carl von Clausewitz, Jean Bodin, Tertullian, Johann Gottfried Herder, Pierre-Joseph Proudhon, and Friedrich Fröbel. After him are Jacques Derrida, Gorgias, Isidore of Seville, Athanasius of Alexandria, Al-Kindi, and Zhuang Zhou.

Among PHILOSOPHERS In Syria