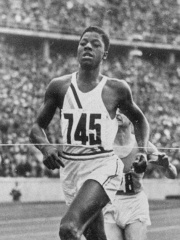 John Youie "Long John" Woodruff (July 5, 1915 – October 30, 2007) was an American middle-distance runner, winner of the 800 m event at the 1936 Summer Olympics.Woodruff was only a freshman at the University of Pittsburgh in 1936 when he placed second at the National AAU meet and first at the Olympic Trials (in the heat 1:49.9; WR 1:49.8), earning a spot on the U.S. Olympic team. Woodruff was a member of Alpha Phi Alpha fraternity.Despite his inexperience, he was the favorite in the Olympic 800 meter run, and he did not disappoint. In one of the most exciting races in Olympic history, Woodruff became boxed in by other runners and was forced to stop running. Read more on Wikipedia

Since 2007, the English Wikipedia page of John Woodruff has received more than 53,462 page views. His biography is available in 17 different languages on Wikipedia making him the 610th most popular athlete.