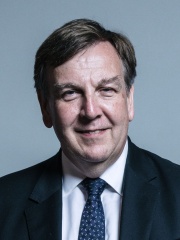 John Flasby Lawrance Whittingdale, (born 16 October 1959) is a British politician serving as Member of Parliament (MP) for Maldon since 1992. A member of the Conservative Party, Whittingdale has served the Minister of State for Media and Data at the Department for Digital, Culture, Media and Sport since 2020, having previously served at DCMS as Culture Secretary in the Cabinet from 2015 to 2016, until he was fired by Theresa May. Whittingdale has been an MP since the 1992 general election, for a series of constituencies centred on the town of Maldon, Essex. Read more on Wikipedia

Among people born in 1959, John Whittingdale ranks 602. Before him are Victoria Jackson, Rowdy Gaines, Brian Goodell, Steve Whitmire, Keith Olbermann, and Lynette Woodard. After him is Aileen Baviera.