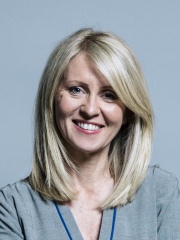 Esther Louise McVey (born 24 October 1967) is a British Conservative Party politician, serving as Member of Parliament (MP) for Tatton since 2017. She previously served in the Cabinet as Minister of State for Housing and Planning from 2019 to 2020, Secretary of State for Work and Pensions in 2018 and Minister of State for Employment from 2014 to 2015. Born in Liverpool, McVey was raised in foster care for the first two years of her life and was then raised by her biological family. Read more on Wikipedia

Since 2007, the English Wikipedia page of Esther McVey has received more than 1,716,468 page views. Her biography is available in 15 different languages on Wikipedia making her the 14,556th most popular politician.