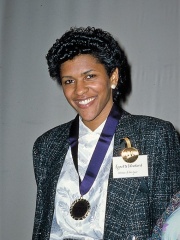 Lynette Woodard (born August 12, 1959) is a retired American basketball Hall of Fame player and former head women's basketball coach at Winthrop University. Woodard made history by becoming the first female member of the Harlem Globetrotters and who, at age 38, began playing as one of the oldest members in the newly formed American women's professional basketball league, the WNBA. While at Wichita North High School, Woodard won two state basketball titles.Woodard went on to play college basketball with the University of Kansas (KU) in 1978, playing there until 1981. She was a four-time All-American at KU, and she averaged 26 points per game and scored 3,649 points in total during her four years there, and was the first KU woman to be honored by having her jersey retired. Read more on Wikipedia

Among people born in 1959, Lynette Woodard ranks 601. Before her are Chandra Cheeseborough, Victoria Jackson, Rowdy Gaines, Brian Goodell, Steve Whitmire, and Keith Olbermann. After her are John Whittingdale and Aileen Baviera.