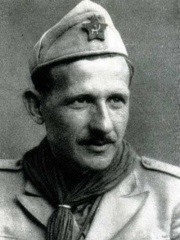 Mehmet Ismail Shehu (January 10, 1913 – December 17, 1981) was an Albanian communist politician who served as the 23rd Prime Minister of Albania from 1954 to 1981. As an acknowledged military tactician, without whose leadership the communist partisans may well have failed in their battle to win Albania for the Marxist-Leninist cause, Shehu exhibited an ideological understanding and work ethic that singled him out for rapid promotion in the communist party. Mehmet Shehu shared power with Enver Hoxha from the end of the Second World War. Read more on Wikipedia

Mehmet Shehu was a communist leader in Albania and a close friend of the country's dictator, Enver Hoxha. He was executed in 1981 for allegedly plotting to overthrow Hoxha.

Among politicians, Mehmet Shehu ranks 2,883 out of 15,710. Before him are Archduke Charles Joseph of Austria, Frederick II, Duke of Austria, Guy III of Spoleto, Maurice, Elector of Saxony, Wilhelm Liebknecht, and Artaxias I. After him are Radu cel Frumos, Kassym-Jomart Tokayev, Albert V, Duke of Bavaria, Emperor Yuan of Han, Dīpankara Buddha, and Olympia Mancini, Countess of Soissons.