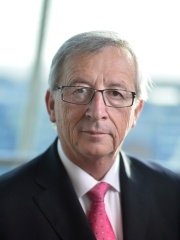 Jean-Claude Juncker (Luxembourgish: [ʒɑ̃ːkloːt ˈjuŋkɐ]; born 9 December 1954) is a Luxembourg politician, who served as President of the European Commission from 2014 to 2019 and as the 23rd Prime Minister of Luxembourg from 1995 to 2013. He was also the Minister for Finances from 1989 to 2009. By the time Juncker left office, he was the longest-serving head of any national government in the EU and one of the longest-serving democratically elected leaders in the world, with his tenure encompassing the height of the European financial and sovereign debt crisis. Read more on Wikipedia

Since 2007, the English Wikipedia page of Jean-Claude Juncker has received more than 2,496,563 page views. His biography is available in 70 different languages on Wikipedia making him the 896th most popular politician.

Others born in Luxembourg

Among POLITICIANS In Luxembourg