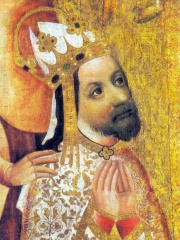 Charles IV (Czech: Karel IV.; German: Karl IV.; Latin: Carolus IV; 14 May 1316 (22 May Greg.) – 29 November 1378), also known as Charles of Luxembourg, born Wenceslaus (Czech: Václav), was the first King of Bohemia to become Holy Roman Emperor. He was a member of the House of Luxembourg from his father's side and the Czech House of Přemyslid from his mother's side; he emphasized the latter due to his lifelong affinity for the Czech side of his inheritance, and also because his direct ancestors in the Přemyslid line included two saints.He was the eldest son and heir of John of Bohemia, King of Bohemia and Count of Luxembourg, who died at the Battle of Crécy on 26 August 1346. His mother, Elizabeth, Queen of Bohemia, was the sister of Wenceslaus III, King of Bohemia and Poland, the last of the male Přemysl rulers of Bohemia. Read more on Wikipedia

Among politicians, Charles IV, Holy Roman Emperor ranks 442 out of 15,710. Before him are Albert II of Belgium, Franz von Papen, John II of France, Jiang Zemin, Mahmoud Abbas, and Zenobia. After him are Guy of Lusignan, Frederick III, Holy Roman Emperor, George I of Great Britain, Ashurbanipal, Robert Schuman, and Charles the Simple.

Among people born in 1316, Charles IV, Holy Roman Emperor ranks 1. After him are John I of France, Magnus IV of Sweden, Robert II of Scotland, Simeon of Moscow, Blanche of Valois, Albert of Saxony, Fa Ngum, and John of Eltham, Earl of Cornwall. Among people deceased in 1378, Charles IV, Holy Roman Emperor ranks 2. Before him is Pope Gregory XI. After him are Joanna of Bourbon and Galeazzo II Visconti.