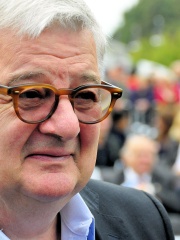 Joseph Martin "Joschka" Fischer (born 12 April 1948) is a German politician of the Alliance '90/The Greens. He served as Foreign Minister and as Vice Chancellor of Germany in the cabinet of Gerhard Schröder from 1998 to 2005. Fischer has been a leading figure in the German Greens since the 1970s, and according to opinion polls, he was the most popular politician in Germany for most of the government's duration. Read more on Wikipedia

Since 2007, the English Wikipedia page of Joschka Fischer has received more than 244,031 page views. His biography is available in 43 different languages on Wikipedia making him the 6,687th most popular politician.

Among politicians, Joschka Fischer ranks 6,646 out of 14,801. Before him are Souvanna Phouma, Tefnakht, Kashyapa, Al-Qa'im, Ivan Stephen of Bulgaria, and Lloque Yupanqui. After him are Diponegoro, Valeriy Borzov, Zu Yi, Adélaïde d'Orléans, Hugh II, Duke of Burgundy, and Christian the Younger of Brunswick.