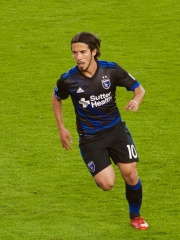 Jahmir Hyka (born 8 March 1988) is an Albanian professional footballer who plays as a left midfielder for Guizhou Hengfeng in China League One and the Albanian national team. A Dinamo Tirana product, Hyka started his professional career in Norway at Rosenborg where did not make a league appearance. He moved to Greek club Olympiacos in 2007, again failing to make a league appearance and who then sent him on loan to Tirana. Read more on Wikipedia

Since 2007, the English Wikipedia page of Jahmir Hyka has received more than 88,161 page views. His biography is available in 22 different languages on Wikipedia making him the 11,098th most popular soccer player.

Among SOCCER PLAYERS In Albania