This page contains a list of the greatest Albanian Soccer Players. The pantheon dataset contains 16,880 Soccer Players, 22 of which were born in Albania. This makes Albania the birth place of the 75th most number of Soccer Players behind Panama and Jamaica. 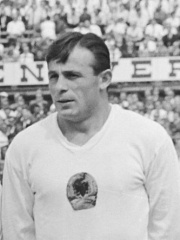 With an HPI of 52.18, Panajot Pano is the most famous Albanian Soccer Player.  His biography has been translated into 22 different languages on wikipedia.

Panajot Thoma Pano (Greek: Παναγιώτης Θωμάς Πάνου, romanized: Panayiotis Thomas Panou; 7 March 1939 – 19 January 2010) was an Albanian football player. He started his career as a goalkeeper in the 17 Nëntori Tirana youth academy, but later became the most prolific centre-forward of their arch-rivals, Partizani Tirana. During his eighteen-year career he played 24 matches as part of the Albania national team and was awarded the Albanian UEFA Jubilee Award.Due to his skills and abilities, Pano earned the nickname "The little Puskás" by sports commentators. 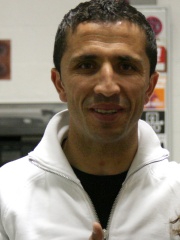 With an HPI of 39.23, Altin Lala is the 2nd most famous Albanian Soccer Player.  His biography has been translated into 28 different languages.

Altin Dodë Lala (born 18 November 1975) is an Albanian former professional footballer who played as a defensive midfielder and former manager. He spent his entire playing career in Germany and represented the Albania national football team. He has also enjoyed a long international career, making 79 appearances for his country since 1998, the second highest in Albania's international history, being overtaken only by Lorik Cana in 2014. He debuted for Albania in January 1998 during a friendly match and then participated in the friendly tournament 2000 Rothmans, helping his team to win the tournament. He participated in overall seven qualifying tournaments of both UEFA European Championship and FIFA World Cup. He also scored three goals for his country. His first international goal came in March 2003 in a UEFA Euro 2004 qualifying match against Russia. Lala took over the captaincy of Albania national team in 2007, ever since Igli Tare was no longer capped by former manager Otto Baric during the UEFA Euro 2008 qualifying. He led his team as a captain in the next qualifying tournaments of the 2010 FIFA World Cup and the UEFA Euro 2012 until 2011 before announcing his retirement from international football. 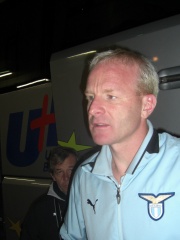 With an HPI of 39.08, Igli Tare is the 3rd most famous Albanian Soccer Player.  His biography has been translated into 19 different languages.

Igli Tare (Albanian pronunciation: [ˈiɡli 'taɾɛ]; born 25 July 1973) is an Albanian retired professional footballer who played as a forward. He is the sporting director at Serie A club Lazio.Tare joined Partizani Tirana as a 9-year-old in 1982, and would later go on to make his debut as a 15-year-old in 1988 before leaving Albania in 1992 to emigrate to Germany. He played in the lower leagues of Germany for Südwest Ludwigshafen and VfR Mannheim before joining Bundesliga side Karlsruher SC in 1996, initially playing for their reserve side before making his Bundesliga debut in 1996. He then joined Fortuna Düsseldorf in the 2. Bundesliga, where he scored 24 league goals in 63 games in two seasons before returning to the Bundesliga with 1. FC Kaiserslautern in 1999, where he netted four league goals in 26 appearances in one year and a half at the club. After falling out of favour at 1. FC Kaiserslautern he joined Serie A side Brescia in January 2001, where he helped the side finish in a respectable 8th place. He remained at Brescia for a further two seasons, and he scored a total of 15 league goals in 75 games before joining fellow Serie A side Bologna in 2003. He spent two years at the club and scored 11 league goals in 55 games, before joining Lazio in a surprise move in 2005 following Brescia's relegation to Serie B. He was primarily used as a backup player at Lazio and he only scored four goals in 54 league games before retiring as a player at the age of 34 in 2008.

With an HPI of 38.48, Erjon Bogdani is the 4th most famous Albanian Soccer Player.  His biography has been translated into 27 different languages.

Erjon Bogdani (born 14 April 1977) is an Albanian professional football coach and former player. He is nicknamed "Bogu" or "Er-Bomber".Regarded as one of the most successful Albanian players of all time, Bogdani began his career at Partizani Tirana in 1994 where he debuted at the age of 16. He left the club in January 1998 to sign with Gençlerbirliği. That summer, Bogdani moved in Croatia to play for Zagreb, before traveling to Italy where he enjoyed the best years of his career.Bogdani played in the following years in Serie A and B, representing Reggina, Salernitana, Verona, Siena, Chievo, Livorno and Cesena. He became a free agent in May 2013 after his contract with Siena ran out, and retired from the sport in February 2014.Bogdani has 74 caps for Albania national team, making his debut in 1996 and scoring his first goal three years later. With 18 goals, he is Albania's all-time top goalscorer, overtaking his former teammate Alban Bushi in 2011 by netting his 15th goal. He holds numerous Albanian records, including most goals as substitute and oldest goalscoring in history, and has been dubbed as the best striker to play for the Red and Black.Following his retirement, Bogdani was initially appointed by Albanian Football Association as a youth talents scouter, starting the job in September 2014. He began his managerial career by being named Gianni De Biasi assistant in August 2015. In December 2016, he was named manager of Albania under-19 team. 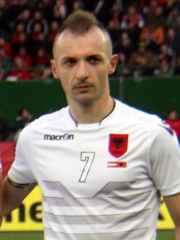 With an HPI of 36.06, Ansi Agolli is the 5th most famous Albanian Soccer Player.  His biography has been translated into 31 different languages.

Ansi Agolli (born 11 October 1982) is an Albanian professional footballer who captains the Albania national team and most recently played as a left back for the New York Cosmos in the National Independent Soccer Association. He plays primarily as a left back or left midfielder, but he can also operate as a right-back. Prior to March 2019, he was attached to Qarabağ in the Azerbaijan Premier League. He is the most decorated Albanian player in the history, winning 16 trophies, the first being the Albanian Superliga title in 2003–04 season. 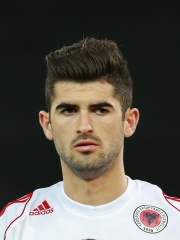 With an HPI of 35.31, Elseid Hysaj is the 6th most famous Albanian Soccer Player.  His biography has been translated into 37 different languages.

Elseid Gëzim Hysaj (Albanian pronunciation: [ɛlsɛˈid ˈhysaj]; born 2 February 1994) is an Albanian professional footballer who plays as a right-back for Serie A club Lazio and the Albania national team, for which he is captain. Hysaj can operate on both sides of the pitch as a full-back. 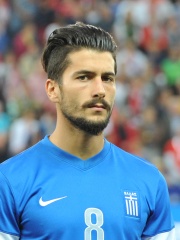 With an HPI of 34.40, Panagiotis Kone is the 7th most famous Albanian Soccer Player.  His biography has been translated into 29 different languages.

Panagiotis Kone (Greek: Παναγιώτης Κονέ, born 26 July 1987) is a Greek former professional footballer who played as an attacking midfielder. He is the current executive director of AEK Athens. Kone started playing football in the youth ranks of Olympiacos, from where he moved to Lens' youth team. He started professional football in AEK Athens before moving to Iraklis in 2008. After two seasons with the club, Kone moved to Serie A club Brescia. After one season in Brescia, he moved to Bologna in 2011 on loan, then transferred permanently to the club in 2012. He then signed for Udinese in 2014. After loan spells with Fiorentina, Granada and AEK Athens, Kone left Udinese in August 2018. Kone represented Greece at various youth levels before making his senior debut in 2010. He was a member of the Greece squad that played in the 2014 World Cup.

With an HPI of 33.79, Rudi Vata is the 8th most famous Albanian Soccer Player.  His biography has been translated into 45 different languages.

Rudi Vata (born 13 February 1969) is an Albanian former professional footballer who played as a defender, and had also a short stint as a manager of Albanian team KF Vllaznia Shkodër. 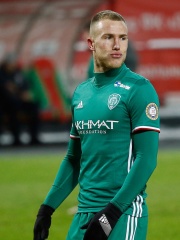 With an HPI of 33.73, Bekim Balaj is the 9th most famous Albanian Soccer Player.  His biography has been translated into 31 different languages.

Bekim Balaj (born 11 January 1991) is an Albanian professional footballer who plays as a striker for Albanian club Vllaznia Shkodër and the Albania national team. Balaj started his football career with his hometown club Vllaznia and made his professional debut at the age of 17 before going on to score 17 goals in 38 games for the club before moving to Turkey to join Gençlerbirliği. After little success in Turkey he returned to Albania and played for Tirana where he scored 15 league goals in 37 games before joining Sparta Prague in the Czech Republic in January 2013. During his time at Sparta Prague he was loaned out to Polish side Jagiellonia Białystok for the entire 2013–14 campaign where he scored 9 goals in 36 games in all competition before return to his parent club for the first half of the following season. He joined Croatian club HNK Rijeka in January 2015 for a fee of €600,000.Balaj begun his international career with under-19 squad in 2008, and two years later also represented the under-21 squad. He made his international senior debut in 2012 and played an important role in Albania's successful UEFA Euro 2016 qualifying campaign, notably scoring the winner with a volley in the opening day against Portugal. He was selected in the 23-man squad for UEFA Euro 2016, making his debut against Romania in the final group match.

With an HPI of 33.66, Alban Bushi is the 10th most famous Albanian Soccer Player.  His biography has been translated into 16 different languages.

Alban Bushi (born 20 August 1973) is an Albanian professional football coach and former player who is the current manager of Albania under-21 and under-20 team. He is nicknamed "Loku".During his playing career he played as a striker. Bushi during his 19-year career has played with 12 different clubs in 6 different countries. He started his career with capital club Tirana where he had an impressive goal-per-game ratio; he also had three short spells on loan with Szegedi in Hungary, FC Remscheid in Germany and Flamurtari Vlorë in Albania. He then went off to Greece to play for a short time at Apollon Smyrni. Following that he enjoyed a decent time at Litex Lovech before spending the next four years in Turkey by representing Adanaspor, İstanbulspor, and Trabzonspor. Bushi returned to Albania in summer of 2004 to play for one season with Partizani Tirana before returning to Greece, where he would spend the next five years at Levadiakos. At the end of his career, Bushi returned to Albania once again to represent Tirana, stating that it was a "moral debt" to end his career where it started. He retired from football in November 2010. Bushi also had a successful international career, being part of Albania national team for 12 years. With 14 goals, he was Albania's all-time leading top scorer from 2004 until Erjon Bogdani overtook him in 2011. He retired from international football in 2007.