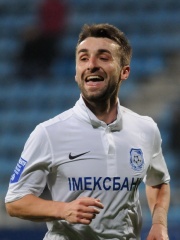 Elis Flamur Bakaj (born 25 June 1987) is an Albanian professional footballer who plays as an attacking midfielder or a forward.Bakaj began his career as a youth player for KF Kristali, before moving to Partizani Tirana. In 2002, he started his professional career with Partizani, playing until 2009 before moving to rivals of Dinamo Tirana. After playing with them for two years, he moved outside of Albania and signed with the Romanian club Dinamo București. Read more on Wikipedia