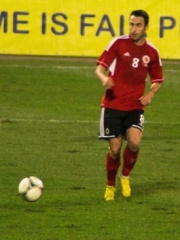 Ervin Bulku (Albanian pronunciation: [ɛɾvin bulku], born 3 March 1981) is an Albanian retired professional footballer and current caretaker manager of the Albania national team. He was a Utility player and played in many positions such as central midfielder, defensive midfielder, right midfielder and even right defender for the Albania national team in years 2002–2015 and in the club level with Tirana where he started and ended his career after playing for various club outside such as Kryvbas in Ukraine, Hajduk Split in Croatia, AZAL Baku in Azerbaijan and Sepahan in Iran. Read more on Wikipedia