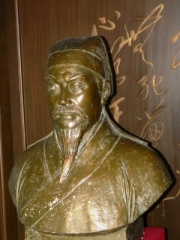 Wen Tianxiang (Chinese: 文天祥; pinyin: Wén Tiānxiáng; June 6, 1236 – January 9, 1283), noble title Duke of Xin (信國公), was a Chinese poet and politician in the last years of the Southern Song dynasty. For his resistance to Kublai Khan's invasion of the Southern Song dynasty, and for his refusal to yield to the Yuan dynasty despite being captured and tortured, he is a popular symbol of patriotism and righteousness in China. He is known as one of the 'Three Loyal Princes of the Song' (大宋三忠王), alongside Lu Xiufu and Zhang Shijie. Read more on Wikipedia

Among writers, Wen Tianxiang ranks 1,450 out of 5,794. Before him are B. K. S. Iyengar, Margherita Sarfatti, Bruno Schulz, Fran Krsto Frankopan, Stig Dagerman, and Marcel Aymé. After him are Carolyne zu Sayn-Wittgenstein, Princess Isabelle of Orléans-Braganza, Eupolis, Ono no Komachi, Aleksandr Kuprin, and Jim Thompson.

Among people born in 1236, Wen Tianxiang ranks 3. Before him are Qutb al-Din al-Shirazi and Violant of Aragon. After him are Chungnyeol of Goryeo, Leo II, King of Armenia, Jacopone da Todi, Stephen the Posthumous, and Albert I, Duke of Brunswick-Lüneburg. Among people deceased in 1283, Wen Tianxiang ranks 2. Before him is Ata-Malik Juvayni. After him are Zakariya al-Qazwini, Margaret of Scotland, Queen of Norway, and Blanche of Navarre, Duchess of Brittany.