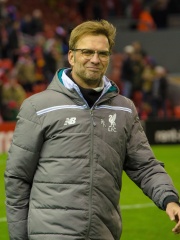 Jürgen Norbert Klopp (German pronunciation: [ˈjʏʁɡn̩ ˈklɔp] (listen); born 16 June 1967) is a German professional football manager and former player who is the manager of Premier League club Liverpool. He is widely regarded as one of the best managers in the world.Klopp spent most of his playing career at Mainz 05. He was initially deployed as a striker, but was later moved to defence. Read more on Wikipedia

Jürgen Klopp is most famous for his time as manager of Borussia Dortmund. He won the Bundesliga twice, reached the Champions League final twice, and won the German Cup once.

Among people born in 1967, Jürgen Klopp ranks 8. Before him are Jason Statham, Kurt Cobain, Nicole Kidman, Julia Roberts, Roberto Baggio, and Suman Pokhrel. After him are David Guetta, Kane, Sung Jae-gi, Willem-Alexander of the Netherlands, Pamela Anderson, and Mark Rutte.