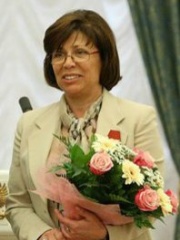 Irina Konstantinovna Rodnina (Russian: Ирина Константиновна Роднина, IPA: [ɪˈrʲinə kənstɐnˈtʲinəvnə rədʲnʲɪˈna]; born 12 September 1949) is a Russian politician and figure skater, who is the only pair skater to win 10 successive World Championships (1969–78) and three successive Olympic gold medals (1972, 1976, 1980). She was elected to the State Duma in the 2007 legislative election as a member of President Vladimir Putin's United Russia party. As a figure skater, she initially competed with Alexei Ulanov and later teamed up with Alexander Zaitsev. Read more on Wikipedia

Since 2007, the English Wikipedia page of Irina Rodnina has received more than 163,870 page views. Her biography is available in 37 different languages on Wikipedia making her the 8,615th most popular politician.

Among politicians, Irina Rodnina ranks 8,572 out of 14,801. Before her are Julius Oppert, Princess Mary of Great Britain, Bogud, Ioannis Georgiadis, Ashikaga Yoshimochi, and Princess Marie Louise of Bulgaria. After her are Eudoxia Streshneva, Fujiwara no Fuhito, Charles Stewart Parnell, Margaret, Countess of Blois, Dan Quayle, and Ioannis Kolettis.