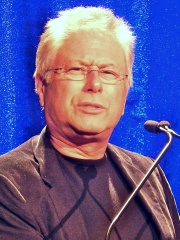 Alan Irwin Menken (born July 22, 1949) is an American composer, songwriter, conductor, music director and record producer. Menken is best known for his scores and songs for films produced by Walt Disney Animation Studios. His scores and songs for The Little Mermaid (1989), Beauty and the Beast (1991), Aladdin (1992), and Pocahontas (1995) have each won him two Academy Awards. Read more on Wikipedia

Among musicians, Alan Menken ranks 546 out of 2,675. Before him are Ewa Demarczyk, Phil Lynott, Sia, David Foster, John Lewis, and Steve Howe. After him are Marty Friedman, Tom Petty, Sister Rosetta Tharpe, The Big Bopper, Roger Hodgson, and Jan Kubelík.