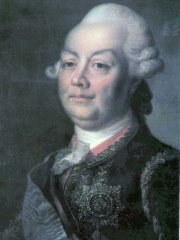 Count Pyotr Alexandrovich Rumyantsev-Zadunaisky (Russian: Пётр Алекса́ндрович Румя́нцев-Задунайский; 15 January [O.S. 4 January] 1725 – 19 December [O.S. 8 December] 1796) was one of the foremost Russian generals of the 18th century. He governed Little Russia in the name of Empress Catherine the Great from the abolition of the Cossack Hetmanate in 1764 until Catherine's death 32 years later. Read more on Wikipedia

Since 2007, the English Wikipedia page of Pyotr Rumyantsev has received more than 77,710 page views. His biography is available in 24 different languages on Wikipedia making him the 6,908th most popular politician.

Among politicians, Pyotr Rumyantsev ranks 6,867 out of 14,801. Before him are Mushezib-Marduk, Juan Guaidó, Valerian Kuybyshev, Claudius Silvanus, Negasso Gidada, and Felipe Calderón. After him are Charles Eugene, Duke of Württemberg, Princess Isabelle of Orléans, Ariobarzanes I of Cappadocia, Emperor Go-Kōgon, Giovanni Mocenigo, and Gonzalo Sánchez de Lozada.