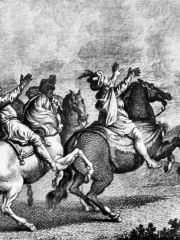 Hydarnes I or Hidarnes I (Greek: Ὑδάρνης, from Old Persian Vidaṛna), also known as Hidarnes the Old by contrast with his son Hidarnes the Young, son of Bagābigna, was a Persian nobleman of the Orontid dynasty during the Achaemenid Empire in the late 6th and early 5th centuries BC. He was one of the seven conspirators against the usurper, Gaumâta, who killed him and then proclaimed Darius I as the Persian king. His name appears in the Behistun inscription among the six conspirators who supported the rise of Darius the Great. Read more on Wikipedia

Page views of Hydarnes by language