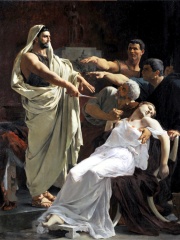 Spurius Lucretius Tricipitinus is a semi-legendary figure in early Roman history. He was the first Suffect Consul of Rome and was also the father of Lucretia, whose rape by Sextus Tarquinius, followed by her suicide, resulted in the dethronement of King Lucius Tarquinius Superbus, therefore directly precipitating the founding of the Roman Republic. Read more on Wikipedia

Among politicians, Spurius Lucretius Tricipitinus ranks 9,141 out of 15,710. Before her are King Jing of Zhou, Carl, 3rd Prince of Leiningen, Francisco León de la Barra, Ernst II, Duke of Saxe-Altenburg, Appius Claudius Pulcher, and Fujiwara no Fuhito. After her are Adam Malik, Ahmad al-Muqtadir, Sancho, Count of Provence, Ada of Caria, Mark Eyskens, and Alexander Lebed.

Others Deceased in 509 BC