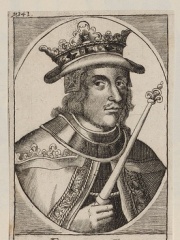 Page views of Horik IS by language

Among politicians, Horik I ranks 1,712 out of 15,710. Before him are Hoshea, Celâl Bayar, Chilperic II, Rudolf IV, Duke of Austria, Attalus I, and Theuderic I. After him are Bernhard von Bülow, Corazon Aquino, Duchess Sophie Charlotte in Bavaria, Suleyman Shah, Symon Petliura, and Bona Sforza.

Among people born in 800, Horik I ranks 8. Before him are Ecgberht, King of Wessex, Pope Nicholas I, Ælla of Northumbria, Pope Boniface VI, Pope Adrian III, and Pope Sergius II. After him are Offa of Mercia, Fatima al-Fihri, Thomas the Slav, Antipope Philip, Gudfred, and Pribina. Among people deceased in 854, Horik I ranks 1.