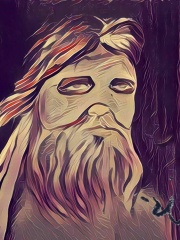 Hashim (Arabic/Persian: هاشم), better known as al-Muqanna‘ (Arabic: المقنع‎ "The Veiled", died c. 783.) was leader of an anti Islamic revolt who claimed to be a prophet, and founded a religion which was a mixture of Zoroastrianism and Islam. He was a chemist, and one of his experiments caused an explosion in which a part of his face was burnt. Read more on Wikipedia

Page views of Al-Muqannas by language

Among politicians, Al-Muqanna ranks 4,329 out of 15,710. Before him are Ramiro I of Asturias, Shabaka, Charles, Grand Duke of Baden, Al-Ashraf Khalil, Elisiv of Kiev, and Sophie Magdalene of Brandenburg-Kulmbach. After him are Vologases V, Henry II, Duke of Lorraine, Tzipi Livni, Ban Kulin, Pak Pong-ju, and Joscelin II, Count of Edessa.

Among people born in 800, Al-Muqanna ranks 16. Before him are Fatima al-Fihri, Thomas the Slav, Antipope Philip, Gudfred, Pribina, and Piast the Wheelwright. After him are Omurtag of Bulgaria, George Syncellus, Thyra, Hemma, Ratchis, and Jayavarman II. Among people deceased in 783, Al-Muqanna ranks 3. Before him are Bertrada of Laon and Hildegard of the Vinzgau. After him are Han Gan, Silo of Asturias, and Bashar ibn Burd.

Among POLITICIANS In Turkmenistan