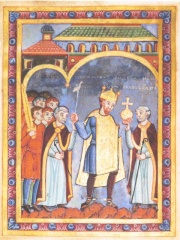 Henry III (28 October 1016 – 5 October 1056), called the Black or the Pious, was Holy Roman Emperor from 1046 until his death in 1056. A member of the Salian dynasty, he was the eldest son of Conrad II and Gisela of Swabia.Henry was raised by his father, who made him Duke of Bavaria in 1026, appointed him co-ruler in 1028 and bestowed him with the duchy of Swabia and the Kingdom of Burgundy ten years later in 1038. The emperor's death the following year ended a remarkably smooth and harmonious transition process towards Henry's sovereign rule, that was rather uncharacteristic for the Ottonian and Salian monarchs. Read more on Wikipedia

Among politicians, Henry III, Holy Roman Emperor ranks 840 out of 15,577. Before him are Todor Zhivkov, Vlad II Dracul, Charles XI of Sweden, Charles XIII of Sweden, Olaf II of Norway, and Wilhelm Pieck. After him are Nur ad-Din, Cao Pi, Cleopatra I Syra, Lech Kaczyński, Ptolemy XIII Theos Philopator, and Louis I of Spain.

Among people born in 1016, Henry III, Holy Roman Emperor ranks 2. Before him is Harold Harefoot. After him are Robert Guiscard, Ferdinand I of León, Béla I of Hungary, Casimir I the Restorer, Amadeus I, Count of Savoy, Emperor Xingzong of Liao, Deokjong of Goryeo, Edward the Exile, Naropa, and Svein Knutsson. Among people deceased in 1056, Henry III, Holy Roman Emperor ranks 1. After him are Theodora Porphyrogenita and Otto, Count of Savoy.