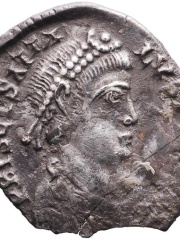 Priscus Attalus (Greek: Πρίσκος Άτταλος, died after 416) was twice Roman usurper (in 409-10 and in 414–15), against Emperor Honorius, with Visigothic support. He was the last non-Christian pretender to the Roman imperial office. Priscus Attalus was a Greek from the Roman provience of Asia whose father had moved to Italy under Valentinian I. Attalus was an important senator in Rome, who served as praefectus urbi in 409. Read more on Wikipedia

Among politicians, Priscus Attalus ranks 5,141 out of 15,577. Before him are Chungnyeol of Goryeo, Leo Jogiches, Matthias Gallas, Ashikaga Yoshiaki, Harpalus, and Joan Blaeu. After him are Al-Adil II, Imran Khan, Archduchess Margarete Sophie of Austria, Ammi-Saduqa, Inca Roca, and Parameswara.

Among people born in 400, Priscus Attalus ranks 26. Before him are Radagaisus, Frumentius, Sozomen, Eutropius, Joannes, and Gunther. After him are Servatius of Tongeren, Quintus Smyrnaeus, Meletius of Antioch, Pelagia, Vincent of Lérins, and Charaton. Among people deceased in 401, Priscus Attalus ranks 2. Before him is Pope Anastasius I. After him are Stobaeus, Gainas, Olympiodorus of Thebes, and Marcia Euphemia.