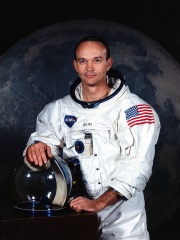 Michael Collins (October 31, 1930 – April 28, 2021) was an American astronaut who flew the Apollo 11 command module Columbia around the Moon in 1969 while his crewmates, Neil Armstrong and Buzz Aldrin, made the first crewed landing on the surface. He was also a test pilot and major general in the U.S. Air Force Reserves. Born in Rome, Kingdom of Italy, Collins graduated in the Class of 1952 from the United States Military Academy. Read more on Wikipedia

Michael Collins is most famous for the Irish War of Independence and the Irish Civil War. He was the Commander-in-Chief of the Irish Republican Army and a member of the Irish delegation during the Anglo-Irish Treaty negotiations.

Among ASTRONAUTS In Italy