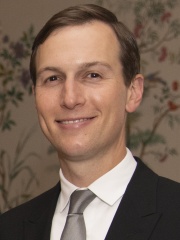 Jared Corey Kushner (born January 10, 1981) is an American investor, real estate developer, and newspaper publisher who is a senior advisor to his father-in-law, Donald Trump, the president of the United States. Kushner is the son of the former real-estate developer Charles Kushner and is married to Ivanka Trump, President Trump's daughter and fellow advisor. As a result of his father's conviction and incarceration for fraud, he took over management of his father's real estate company Kushner Companies, which launched his business career. Read more on Wikipedia

Since 2007, the English Wikipedia page of Jared Kushner has received more than 16,477,513 page views. His biography is available in 42 different languages on Wikipedia making him the 290th most popular businessperson.