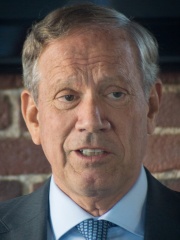 George Elmer Pataki (; born June 24, 1945) is an American lawyer and Republican politician who served as the 53rd Governor of New York (1995–2006). An attorney by profession, Pataki was elected mayor of his hometown of Peekskill, New York and went on to be elected to the State Assembly and the State Senate. In 1994, Pataki ran for Governor of New York against three-term incumbent Mario Cuomo, defeating him by a margin of more than three points as part of the Republican Revolution of 1994. Read more on Wikipedia

Since 2007, the English Wikipedia page of George Pataki has received more than 1,415,299 page views. His biography is available in 28 different languages on Wikipedia making him the 12,839th most popular politician.