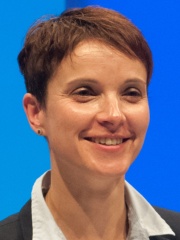 Frauke Petry (German: [ˈfʁaʊkə ˈpeːtʁiː]; née Marquardt; born 1 June 1975) is a German politician who chaired the Alternative for Germany (AfD) party from 4 July 2015 to 29 September 2017. A chemist by training and with a professional background as a businesswoman, some political scientists described Petry as a representative of the national conservative wing of that party.Petry had formerly served as one of three party spokespersons from 2013 to 2015, and became leader in 2015, displacing the party's founder Bernd Lucke after an internal power struggle; Lucke subsequently left the party and said it has "fallen irretrievably into the wrong hands" after Petry's election. Petry left the party in turn after stating it had become "anarchical" and unable to provide a "credible platform".Petry is noted for her anti-Islam views, for her calls to ban minarets, and for arguing that German police should "use firearms if necessary" to prevent illegal border-crossings. Read more on Wikipedia