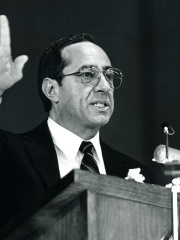 Mario Matthew Cuomo ( KWOH-moh, Italian: [ˈkwɔːmo]; June 15, 1932 – January 1, 2015) was an American politician and member of the Democratic Party. He served as the 52nd Governor of New York for three terms, from 1983 to 1994, Lieutenant Governor of New York from 1979 to 1982, and Secretary of State of New York from 1975 to 1978. Cuomo was known for his liberal views and public speeches, particularly his keynote speech address at the 1984 Democratic National Convention in which he sharply criticized the policies of the Reagan administration, saying, "Mr. Read more on Wikipedia

Since 2007, the English Wikipedia page of Mario Cuomo has received more than 4,683,779 page views. His biography is available in 31 different languages on Wikipedia making him the 11,992nd most popular politician.