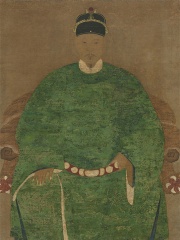 Zheng Chenggong, Prince of Yanping (27 August 1624 – 23 June 1662), better known internationally by his Dutch-Romanised Hokkien honorific Koxinga or Coxinga (Chinese: 國姓爺; pinyin: Guóxìngyé; Pe̍h-ōe-jī: Kok-sèng-iâ), was a Chinese Ming loyalist who resisted the Qing conquest of China in the 17th century, fighting them on China's southeastern coast. In 1661, Koxinga defeated the Dutch outposts on Taiwan and established a dynasty, the House of Koxinga, which ruled the island as the Kingdom of Tungning from 1661 to 1683. Read more on Wikipedia

Koxinga is most famous for his invasion of Taiwan in 1661 and his subsequent establishment of the Kingdom of Tungning.

Page views of Koxingas by language

Among politicians, Koxinga ranks 1,638 out of 15,710. Before him are Bao Zheng, Lü Buwei, Injo of Joseon, Al-Hakim bi-Amr Allah, Fredrik Bajer, and Hisham ibn Abd al-Malik. After him are Levi Eshkol, Gwanghaegun of Joseon, Leontios, Li Xiannian, Anna Maria Mozart, and Teia.