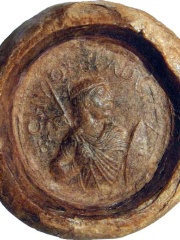 Conrad I of Germany

Conrad I (German: Konrad; c. 881 – 23 December 918), called the Younger, was the king of East Francia from 911 to 918. He was the first king not of the Carolingian dynasty, the first to be elected by the nobility and the first to be anointed. Read more on Wikipedia

Since 2007, the English Wikipedia page of Conrad I of Germany has received more than 117,908 page views. His biography is available in 40 different languages on Wikipedia making him the 1,653rd most popular politician.

Page views of Conrad I of Germanies by language

Among politicians, Conrad I of Germany ranks 1,643 out of 14,801. Before him are Richard von Weizsäcker, Uzun Hasan, Rudolph of France, Manco Cápac, Al-Mahdi, and Charles Albert of Sardinia. After him are Karađorđe, Sigurd the Crusader, Albert II, Duke of Austria, Li Peng, Algirdas, and Ptolemy XI Alexander II.