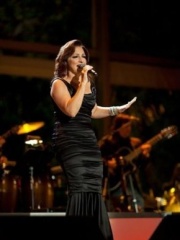 Gloria Estefan (Spanish: [ˈɡloɾja esˈtefan]; born Gloria María Milagrosa Fajardo García; born 1 September 1957) is a Cuban-American singer, actress, and businesswoman. Estefan is a seven-time Grammy Award winner, a Presidential Medal of Freedom recipient, and has been named one of the Top 100 greatest artists of all time by both VH1 and Billboard. Estefan's record sales exceed 75 million worldwide, making her the second best selling female latin artist in history and one of the best-selling female singers of all-time.A contralto, Estefan started her career as lead singer of Miami Latin Boys, which was later renamed Miami Sound Machine. Read more on Wikipedia

Gloria Estefan is most famous for being a singer and songwriter. She is also the wife of Emilio Estefan, who is a singer and producer.

Among SINGERS In Cuba