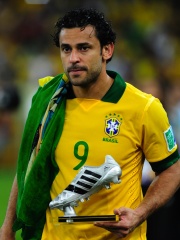 Frederico Chaves Guedes (born 3 October 1983), also known as Fred (Brazilian Portuguese: [ˈfɾɛd(ʒ)i]), is a Brazilian professional footballer who plays as a striker for Fluminense.Fred began his career at América Mineiro before transferring to local rivals Cruzeiro in 2004. After two seasons there, he moved to Lyon of France in a protracted transfer saga, and won three consecutive Ligue 1 titles. He made his international debut for Brazil in 2005 and was selected for the 2006 World Cup, and was also part of their victories at the 2007 Copa América and the 2013 Confederations Cup. Read more on Wikipedia

Since 2007, the English Wikipedia page of Fred has received more than 201,652 page views. His biography is available in 56 different languages on Wikipedia making him the 1,579th most popular soccer player.

Page views of Freds by language