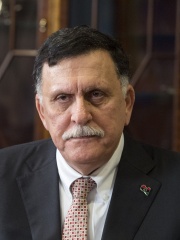 Fayez Mustafa al-Sarraj (Arabic: فائز السراج or فايز السراج; born 20 February 1960) is a Libyan politician, who served as the Chairman of the Presidential Council of Libya and prime minister of the Government of National Accord from 2016 to 2021, which was formed on 17 December 2015 under the Libyan Political Agreement. Read more on Wikipedia

Among politicians, Fayez al-Sarraj ranks 5,448 out of 15,710. Before him are Emperor Yizong of Tang, Halide Edib Adıvar, Xiao Yi of Shang, Arnuwanda III, Fevzi Çakmak, and Edward Balliol. After him are Baldwin VII, Count of Flanders, Brian Boru, Philip I, Prince of Taranto, Philip I, Count of Flanders, Al-Mu'tamid ibn Abbad, and Joaquín Balaguer.