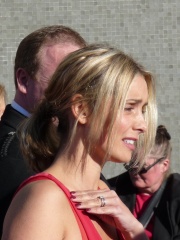 Louise Elizabeth Redknapp (née Nurding, born 4 November 1974), is an English singer, songwriter and media personality. She was a member of Eternal, an R&B girl group which debuted in 1993 with their quadruple-platinum studio album Always & Forever. In 1995, she departed from the group for a solo career, in which she released the platinum-selling albums Naked (1996), Woman in Me (1997) and Elbow Beach (2000). Read more on Wikipedia

Since 2007, the English Wikipedia page of Louise Redknapp has received more than 2,911,025 page views. Her biography is available in 15 different languages on Wikipedia making her the 2,903rd most popular singer.

Among singers, Louise Redknapp ranks 2,918 out of 3,001. Before her are Ella Eyre, Chance the Rapper, Plies, Ronan Parke, Ralf Mackenbach, and Nina Radojičić. After her are Alexander Ivanov, Lexa, Sunidhi Chauhan, Colby O'Donis, Risako Sugaya, and Christos Mylordos.